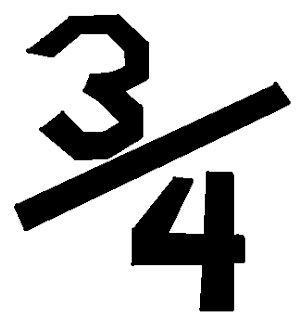 While teaching a topic of computer organization in class, I came across the interesting concept of fractions! The topic was- fractions having denominator of zero. Generally, when computer solves the expressions with denominator of zero, they treat integer and floating point arithmetic differently. The reason is that integer and floating point arithmetic formats in the computer are totally different and they are solved with the help of different arithmetic units. If 8086 processor is concerned, floating point operations were solved by coprocessor 8087. Now internally, processor ALU solves such mathematics with the help of separate FPU i.e. floating point unit.
Actually, the word fraction means a part of a whole. In mathematics, it is denoted by two numbers who are separated by ‘–‘ or ‘/’. Division of two numbers is done with the help of these two different signs. The rule of mathematics tells that when numerator is zero the result of the fraction is zero. It does not matter what denominator is? Zero divided by a number is always zero. If numerator is smaller than denominator such as 4/9 then this fractions is called as proper fraction. But for the inverse case it is improper fraction. One more term common or vulgar fraction is used in mathematics. When fractions is obtained by dividing an integer by integer then it is vulgar fraction. So both proper and improper fractions are vulgar fractions!
When in a C program we divide a float number and 0.0 it gives floating point error of domains. One interesting this is that when 0.0 is divided by 0.0 then the result given is different! In Java programming language, 0.0 / 0.0 is a special case where the output is defined by a constant called NaN i.e. Not A Number! But when a float number is divided by 0.0 then it is either Infinity or –Infinity. The computer has made this case specialized only for floating point numbers! When integer zero is divided by another integer zero or an integer number is divided by zero then computer always given divide by zero error, which is actually a run-time error. No programming language of computer is exception for it.
A strange thing that I would like to mention here is that every year Washington Post newspaper publishes a list of favourite top ten T-shirt slogans. One of them is “Five out of four people don’t understand fractions!!!”. It is really strange but true! American preacher and author told that, when life ceases to be a fraction becomes an integer…
posted by Tushar B. Kute येथे Saturday, July 30, 2011 No comments: 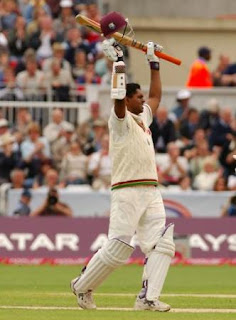 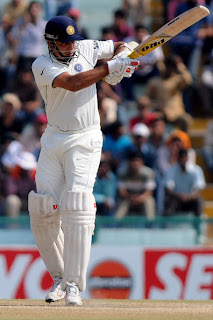 The first fort won by Chhatrapati Shivaji Maharaj is Torna. This is the only recognition of Torna fort in the history of Maharashtra. Shivachhatrapati captured this fort first time to form the nucleus of Maratha Empire in India. The year was 1643. Shivaji gave the name Prachandgad to this fort. It implies that it is a 'huge fort'. As, the name is given my Shivaji himself, we can imagine how huge this fort could be! 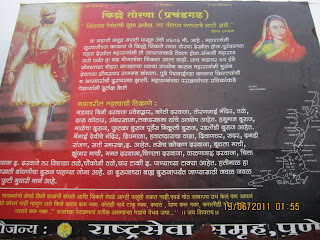 We have visited many forts of Maratha empire, but for the first time we saw such a difficult and huge fort. This fort is known to be the highest fort in the Pune district with more than four thousands of feet in height. At the age of 16, Shivaji won this fort and found many cannes of gold, which was used to prepare the fort for further operations.
Torna is nearly 42 kilometers far from Pune city. We went to Sinhgad road first, which is about 22 kilometers from Pune. Sinhgad is looking like a hot picnic spot nowadays! Torna is 22 kilometers from right of the Sinhgad. We have to go by Khanapur city. Torna fort is situated in Velhe taluka of Pune district. The road from Sinhgad to Torna is really adventurous and goes through valleys. It has taken more time to reach Torna than expected. We went in the rainy season and obviously worried about the same. After reaching the Pabe village on the way there are two turns: left one is for Rajgad and right one for Torna fort. These are 3 and 5 kilometers from this turn respectively. At the entrance of the Velhe, we saw a huge statue of Chhatrapati Shivaji. We needed to park the vehicle at the base of the fort itself. From the base, fort is nearly four-five kilometers ahead. In the monsoon, the atmosphere becomes very pleasant to see. It is required to cross two mountains to reach the main fort. When we started climbing the mountain, we did not knowing where to reach at the end? But, the road forced us to keep climbing. The peak of the fort was seen from any point of the whole mountain, which was attracting us to reach there. At the base, we saw a statement given by James Douglas: ‘If Sinhgad is cave of Lion then Torna is eagle’s nest’. This statement thoroughly described how Torna is! After reaching to the peak of First Mountain, we saw the view of Panshet dam. The valley outlook gave the birth to this awesome atmosphere. Due to the clouds over the bastion of the fort, the fortification was not seen from any point of the mountain. When we started climbing actual fort, it was a thrilling experience. We experienced the real fight with this Prachandgad. At one point, the force of wind was tremendous and on the both the side deep valleys were there. Generally, wind point on the mountains is situated on the top, but here it was not at the top! Rainy season made trekking of this fort most adventurous.
At one point, I had thought of returning to the base of the fort without climbing! Wind and rain had made this trek most thrilling for me ever. There were no railings till last 10 meters of the bastion of the fort. When we reached in the ‘cloud’, it was totally dim atmosphere everywhere. The base and village Velhe was vanished in the fog! At the top, monkeys were sat to give us a warm welcome for the entering amazing Torna fort. It was our bad luck(?) that it was not possible to visit every spot on the fort due to dark fog on the top. But, we satisfied that we completed the climbing of highest peak in our district. It is made only possible for us to visit Mengai devi and Toranjai temple on the fort. It took two hours to climb the fort. I still think, in this very less time, how did we manage to go there?
posted by Tushar B. Kute येथे Saturday, July 16, 2011 No comments: