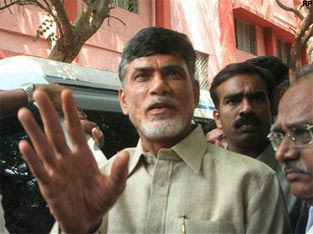 How strangely the politicians behave in this country? We all saw a good example of this yesterday in Mr. Andhrababu Naidu. He entered in Maharashtra state to see the dam project of at Babhli. Actually, it is been cleared by the Supreme Court that Maharashtra state is justifying with the water of river by constructing the dam at Babhli. Enough water supplies have given to Andhra Pradesh by government. But then also looking the elections ahead Telugu desam suprimo Mr. Andhrababu Naidu is on fast against the government strategies…!

Mr. Naidu came in with his all forces of MLAs to show their willingness to solve the water problems of Telugu people in Telangana region. The myth that is fitted in the minds of Indian politicians that our ‘netas’ are our true leader or caretaker is understood by common people now. Actually, Mr. Andhrababu is not caring about the people of Telangana. He is just making the political issues out of these situations. Few months before, 12 MLAs from Andhra has resigned from their post to support the separate Telangana state. Now, supplementary elections are ahead. In order to be famous Mr. Andhrababu is doing all these ‘nautanki’ here in . The water dispute is in Supreme Court from 2003 when Naidu was in Government. That time, he just neglected the problem. Now, in order to win the elections he is focusing himself on Telugu news channels.

He came in this state with his all MLAs with a lot of dry fruits and water bottles on Bislery to fight for ‘ water’. After his arrest, he was kept in an AC room provided in ITI of Maharashtra government. He is a five star prisoner of . Due to this, it has forced to extend the admission process of ITI where he stayed. Students are facing a lot of discrepancies only because of tight z plus security provided to Andhra babu. We don’t know when the ‘nautanki’ of Mr. Andhra babu will finish. But I think he is a typical Indian politician who reads the minds of poor Indian people. After elections I am sure that he won’t look after the water distribution of Godavari river from .

I thank Mr. Andhra babu for entertaining the citizens…