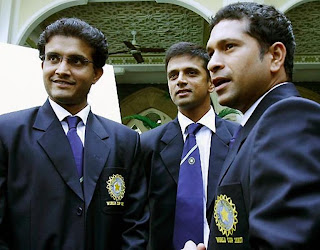 These are the three players whom I appreciate most in the world of cricket. I think due to these players, India has reached at top of the rankings. I have seen the play of them from the start of their career. Actually it is not true 100% for Sachin. I started watching him from 1996 world cup onwards. But it was the actual rise of his career. After the shameful defeat of India in 1996 world cup at home. Saurav and Rahul were included in the Indian squad. Saurav Ganguly has already debuted in ODI matches in Australia. It was a test debut for both of them in the tour of England. Saurav was amazing in this tour. He smashed the century and taken a wicket in his first over bowled in the debut match against England. Rahul has also impressed the spectators with his classic batting.
These three players have aggressiveness and coolness in common. Sachin is aggressive on pitch and cool in nature. Saurav is aggressive in both nature and on pitch. Regarding Rahul, he is cool in both nature and on the pitch. After 1996 to 2005, these three players have taken team India towards top position. They are having most of the world records scored in the cricket listed below:

Saurav Ganguly:
1.He is India’s most successful captain recorded 21 test wins under his captaincy.
2.He is only left handed batsman to score more than 10000 runs in ODI.
3.He is the only player to score a century in debut match and took a wicket in debut over.
4.He is scorer of maximum number centuries in ODI being as a left handed batsman.
5.He is the only player after Sachin Tendulkar to obtain 10000 runs + 100 wickets in ODIs.
6.First Indian batsman to score ODI century in Australia.
7.First Indian captain to score Test century in Australia.
8.Involved in highest runs partnership in World Cup cricket along with Rahul Dravid.
9.India’s highest individual scorer in the single innings in World Cup (183 vs. Sri Lanka)
10.Got 5 ‘Man of the Match’s in single series. He is the only batsman to achieve this feat. Even in World Cup also no one has achieved it.

Rahul Dravid
1.Most of the records that Dravid has achieved are in the tests. He is the player who has played all the 95 tests continuously that India has played! He did not miss any test match from his debut till 95th.
2.Highest number of catches in test cricket.
3.Scored five centuries in continuous five test matches, an Indian record.
4.79 century partnerships in test cricket. This is the world record.
5.He has involved the record partnership in ODI, that is, 332 runs vs. New Zealand with Sachin Tendulkar.
6.He has involved in two 300 runs partnerships in ODI cricket. Only player to achieve this.
7.Scored the centuries in all 10 test playing nations.
8.He played continuous 117 ODI matches without a duck!
posted by Tushar B. Kute येथे Friday, December 04, 2009