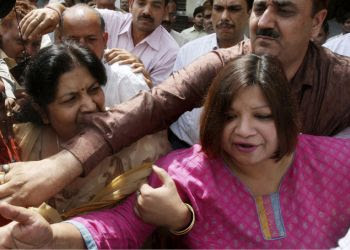 It is said that a nation is always in most danger due to internal enemies rather than the external enemies because, the enemies residing inside knows all things about the nation. The external enemies try to grab the information from the inside enemies. When both get hands together then it will be simple to defeat a nation.
Recently, India found an internal spy who was supplying the sensitive information to the Pakistan which is one of the rivals of India. Pakistan considered as India’s biggest enemy nation. The spy is ‘she’. After this chapter of Madhuri Gupta has started it is realized that an enemy does not have gender or a religion. She is an IFS officer working is Indian high commission in Pakistan. Working in Pakistan from India rather than any of the countries in world is considered as a challenging profile! (It is my personal opinion!) Indian government must have thought something while sending the high commissioner officers in Pakistan. Government must have thought about the background or the loyalty of the officers. Madhuri Gupta was believed by Indian government that she will work with loyalty in Pakistan. Now, her matter is open. She has proved a foe of our own country. She told that she has done to teach a lesson to the Indian government. But, few say that she was in love with a Pakistani national. The actual matter is not open yet. But now Indian got a lesson from this.
Some of the Indians officials are still not loyal with the nation. We are in danger due to such peoples. Be aware of them…!
posted by Tushar B. Kute येथे Monday, May 03, 2010