Who will be champion? 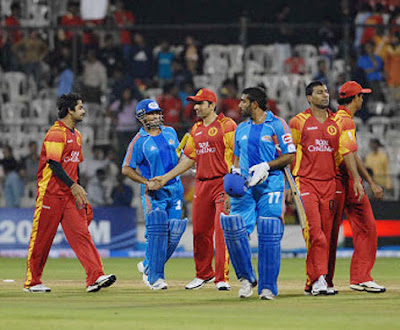 After creation of the poll for the champion on this year’s IPL on my blog I got many entries of votes. The Mumbai Indians got highest number of voting for their championship. Frankly speaking, I also think the Mumbai Indians will be the champions this seasons IPL. I voted for the same…! But, they will face the strong competition from Bangalore Royal Challengers. Till this moment of the IPL, only Mumbai and Bangalore have shown drastic performance in their play.
I thank Arjun Sabale (Rahul Dravid) for supporting Royal Challengers Bangalore. I remember in the first season of the IPL this team was considered as the test team. It is the case actually. But in second and third season Bangalore has raised their play and joined as the strong candidate for win. There is a same case for Mumbai Indians also. In first two seasons they have not performed well but now their game has improved under Sachin Tendulkar’s captaincy. The captain is also looking in good form after hitting three fifties till in the season. If he play well then Mumbai will definitely win. But the team is not only relied on him but they also got players like Saurabh Tiwary, Shikhar Dhawan, Pollard and Bravo. Their bowlers are also performing well. This was the only team in IPL which was not having any Pakistani player…! So, they did not suffer any type of player loss.
On Friday, I saw a full innings on an IPL match for supporting Mumbai Indians. Actually, I wanted to see the batting of Sachin Tendulkar. Because, the Chennai had made more than 180 runs…! So, I was interested to see Sachin’s batting. He is the greatest player. He played very well… as a best experienced player. All of the members who are directly or indirectly involved in IPL; had played against or with Sachin Tendulkar some time. For example, the commentators and umpires also…!
Hope, Mumbai will keep their play on the same track to perform better. I will revise their play once again in the next month. If we think about the Bangalore; they have a good strength in batting as well as in bowling rather than that of Mumbai’s. Almost all of them are in good form including captain Anil Kumble. The rising star Manish Pandey and protean Jack Kallis is the best opening pair till in this tournament. Jack Kallis seems to a strong contender for the orange cap. He is performing very very well. Now, I an interested to see the encounter between Mumbai and Bangalore. This will be the most interesting in this tournament.
posted by Tushar B. Kute येथे Sunday, March 28, 2010