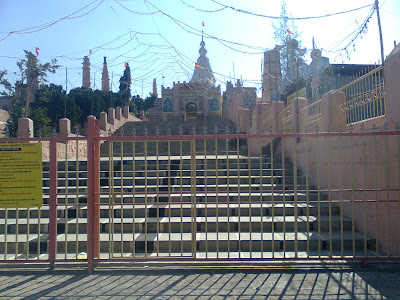 The holy place Korthan (Tal. Parner, Dist. Ahmed Nagar, Maharashtra) is well known and famous for the Khandoba Devasthan. I have heard this place for many times but visited for the first time in my life. The place is situated in village Pimpalgaon Rotha in the same taluka. When we visited here, it was a off-season. So definitely there were very less number of pilgrimage. Almost equivalent to none. The annual festival was already celebrated this year. This place also famous for the racing of bullock carts. The roadway that is created for the racing was very tough for the general bullocks. Only special racing bullocks can cross this roadway. The Korthan place is actually not a village. It comes under Pimpalgaon Rotha which is situated nearly 4 kilometers away from the place.
We saw a shilalekh (message written on stone) on the wall of the temple. It was written in 14th century. The internal architecture of the temple was very nice and similar to other Hindu temples in the region of Maharashtra. In recent days, the new road is built under 'Pradhanmantri Gram Sadak Yojana' forming a shortcut from village Belhe to Korthan with just 15-20 minutes distance.
One must visit this place at least once.
posted by Tushar B. Kute येथे Tuesday, April 13, 2010